Posted on February 13, 2012 by allinadayofme 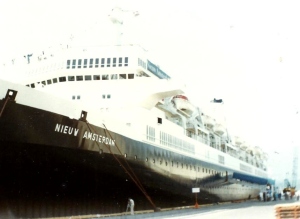 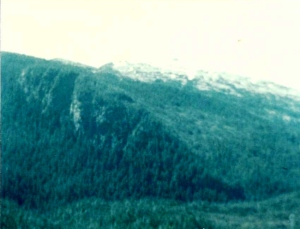 On June 13, 1984 Jerry and I were celebrating our 25th anniversary on board the Neiuw Amsterdam Cruise Ship! We boarded at Vancouver, British Columbia and were headed for the Glacier Bay, Alaska. What a fantastic seven days we had. But this is a post about British Columbia so the details about the cruise will have to wait for another post!

As we sailed on through the inside passage of British Columbia to Alaska the scenery was so beautiful! These pictures really don’t do justice to what we were seeing in awe!

I’ve had other experiences in British Columbia, like the day I spent in a bus depot in Vancouver waiting to ride down to Everett, Washington. It was an out of this world experience that I had there that many folks wouldn’t even believe.

But here goes, I had several hours to wait for my bus south. I had flown into Vancouver from Regina, Sask. Then waited for a bus to Washington.

Later, on the bus, late at night I fell asleep. Suddenly I woke up, we were stopped. Was this my stop? Should I get off? What should I do? I stood up and looked around. There was the man a couple of seats behind me and he was looking at me. He mouthed the words to me, “This is not your stop.”

“Oh, okay,” I said and sat down. How did he know it wasn’t my stop? We hadn’t talked to each other, not a word. We had only looked at each other.

Later, we arrived at Everett, Washington. Three people got off. Two men and myself. One of the men was the man who somehow knew where I was going.

It was about three AM. I had planned on waiting inside the depot until morning and then calling my friends to pick me up and take me to my parents in Stanwood, Washington. The depot was closed, dark, locked up. We were in a very unfriendly section of town. Not a place for a woman to sit on the sidewalk and wait for morning!

My new friend asked me what I was going to do. I had no idea. Then I saw a convenience store all lit up about a block away. I said I could walk to that store and wait inside until daylight and then call my friends. He seemed to agree that was a good idea. He stayed with me as I walked to the store and then went away with someone else. I have never seen him again.

Do you believe in angels? I do now. I believe he was watching over me from the time we were in the depot in Vancouver to when we finally arrived at the convenience store. So there’s my story, believe it or not.

I can't believe I'm in old age! I'm now in my eighties! I'm a child of God, wife to one, mother to five, grandmother to 15 plus two granddaughters-in-law! I'm a great-grandma now! I'm a sister, aunt, cousin, friend and neighbor. I'm a housewife and former ESL tutor. I love reading and writing. I've just retired from writing and editing a newsletter, Prime Time News, for seniors. I love genealogy, traveling, birds and animals, blogging and taking pictures.
View all posts by allinadayofme →
This entry was posted in Anniversary, Canada, Jerry, Me, Traveling and tagged Angels, British Columbia, Canada, Cruise, Travel, Water, World. Bookmark the permalink.