I Lived In A Chicken House?

I was in fifth grade. My family had just moved from East Peoria, Illinois to Waterloo, Iowa. We were living in Grandma’s house until we could find a house for us. It was a large boarding 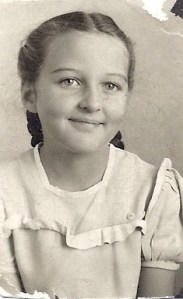 house so Mother worked for Grandma.

My cousins, Roy and Beulah, had a farm outside of Waterloo, where they lived with their six children and Roy’s mother. We loved visiting them. There was a long building a ways behind their house, which was empty but it was meant to be a chicken house. Roy didn’t farm, he worked for John Deere and Beulah, worked at Rath Packing Co.

Since they weren’t interested in raising chickens and knowing we needed a place to live, Roy offered to remodel the chicken house and make it into an apartment house.  It was work but he got it finished and we moved in. It had a living room and kitchen and three small bedrooms. Bathroom …we followed a path out in back! It was hidden in the trees that made up the woods behind us.

Shirley was a young teenager and she and Lorraine became good friends. Leroy and I were in the same grade and the same classroom in school. We became best friends! The other four cousins were all younger than Leroy.

On the farm there was a large round barn where we, kids, loved to play. It was built on a hill so the lower level opened, on the side, at ground level. That’s where the animals entered. But I only know of one animal! Leroy and his siblings had a pony for a while! Once when Leroy and I were riding the pony together, Chuck, the next one down of the six kids, decided to chase the pony with a long twig. The pony panicked and took off on a dead run! Leroy and I held on for dear life! When the pony came to a fence he stopped dead still! Leroy and I went flying!!! Neither one of us was hurt, just bruised, thank goodness, but we were sore! And we were mad!!!

This picture is NOT of their round barn, but it sure REMINDS me of it! 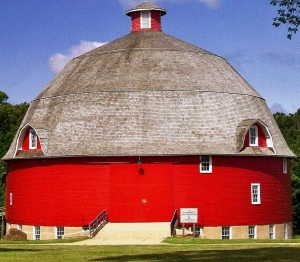 The front of the barn opened, at ground level, too, where bales of hay were stored. We loved playing in the bales of hay. My brother, Billy and I and our six cousins spent so much time and work making hide-outs in the hay! We even made tunnels going from one hide-out room to another! We spent hours and days working to make our hide-outs! Today, I’m surprised none of us ever got hurt playing in those bales. The older of us kids lifted them up and placed them  over top to make small rooms. Even I lifted them…I wasn’t very big! It proves to me that when there is a job to be done…if we want to do it badly enough, we can do it! We really wanted to make our hide-outs.

My family lived in the apartment building for about a year and a half. During that time my dad traveled as an evangelist. He bought about a quarter or half acre of land, on the other side of the woods behind our apartment, from my cousin, Roy. When summer came Dad and Richard, my older brother and some friends helping out, built us a small house on our new land.  We moved out of the chicken house apartment building!

Oh, the memories I have of living in the chicken house apartment house. Over the years Lorraine and I have talked about living there many times. She was still embarrassed.

Last year Leroy and I were visiting. We hardly see each other any more so that was a privilege for me. We began reminiscing about our days living behind their house in the apartment. I told him it was such an embarrassment, especially to Lorraine, to think we lived in a remodeled chicken house.

Leroy began to tell me about the farm, facts I had never heard before! The house and land had been purchased by a family who had high hopes. Planning to raise chickens the man built the long chicken house. He also built the big round barn. He was up at the top of the roof working on, like a steeple, when he got caught in some ropes or wires, falling to his death! The family was devastated and put the farm up for sale. Roy and Beulah bought it.  The barn had never been used.   No chickens had ever been in the chicken house!!! No wonder it didn’t smell!!!

Oh, I wish I would have known this years ago! I would have told Lorraine. She’s gone now. What a difference I think it would have made in her attitude toward our living in the chicken house apartment building. Now, I’m wondering…were we told about it? Kids don’t always listen. I suspect we may have been told this story and we didn’t pay any attention or we didn’t believe it!

I wish I had pictures to go with this story. We just didn’t take many pictures back then…we couldn’t afford it!

2 Responses to I Lived In A Chicken House?