Posted on November 18, 2013 by allinadayofme

Today I said “Good-bye” to my cousin, Erma. It was time…she was 95 years young. But it’s hard to say good-bye, even when they’re older. She was a cousin on my dad’s side of the family. Her mother lived to be 102 so I was surprised when I heard that she had died. Erma lived in Iowa, so we, my daughter, Pam and Gene, my son-in-law, drove from Chicago this morning and returned late this afternoon. I came to Chicago from my home in Michigan, by train yesterday. I’ll be returning home by train on Wednesday.

The good part of going to a funeral is renewing friendships with family and friends that we hardly ever are with. So today was the day I got to be with my cousin LJ and his daughter, my second cousin, Iris. LJ’s dad and my dad were brothers.  It was soooo good to see them, especially LJ. He’s 89 and I’ve not seen him in years and years!

Iris and I didn’t know each other personally until facebook came along! Now we’re good

friends and it was great to be with her today.  This picture is LeRoy, LJ and Iris.

The last time I saw LeRoy and Carolyn was at my mother’s memorial service in Colorado, in September! We’ve got to stop meeting like this! I’ve written about LeRoy before…he’s my most favorite cousin in the whole wide world! It was soooo good to be with them today.

I’ve written about my second cousin, Kay, just recently because she went on the cruise to

Hawaii with Pam, Gene, Jerry and me.  Kay is the younger daughter of Erma. I’ve always known Kay but on our cruise I got to know her a lot better. She now rates right up there at the top with LeRoy! So here’s a picture of the three of us. Kay, myself and LeRoy. 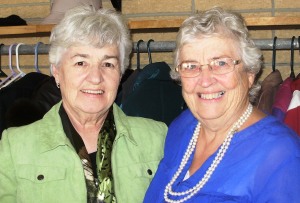 This is Rosemary and me. I think she might go by Rose now but she’ll always be Rosemary to me. She’s the oldest daughter of Erma and the sister of Kay. Rosemary’s husband died just a few years ago on the same day now as her mother, Erma.

So what a day we had of getting reacquainted and catching up on news. There were other relatives there too but I must stop now and go to bed.

As we were driving away from Winthrop, Iowa we saw two Bald Eagles soaring above us! What a thrill!

We drove on highway # 20 through Illinois and Iowa. What a lovely route! Farms and barns, old barns! I love old barns!

As much as I loved seeing everyone today I hope it’s a long time before we have to get together again to say “good-bye” to another family member.