Posted on September 16, 2013 by allinadayofme

School was out for the summer, 1932, so Corina went to visit her Aunt Pauline and Uncle Tony Parrish, in Cedar Falls, Iowa. Her own family was now living in La Crosse, Wisconsin. It was the summer between her junior and senior years of high school, she was eighteen years old. Corina’s Uncle Larry Reinertson also lived there. He and Pauline were brother and sister of Corina’s mother, Laura.

Larry had an Indian Chief motorcycle and offered to take Corina for a ride. She, being an adventuresome teenager agreed. Larry stopped by the President Hotel where both he and Uncle Tony worked in the kitchen. Uncle Tony was the chef.  A friend, Glen Williamson,

also worked there. Glen stepped outside with Larry, and saw Corina on the motorcycle! “Where did you get such a beauty?” Glen blurted out?! It was then Larry introduced Glen to his niece, Corina Aanas.

Glen and Corina spent as much time together as they could, from then on, until she returned to La Crosse to finish her senior year of high school. Their first kiss was in the

living room of Aunt Pauline’s house. They sent letters back and forth to each other. This is a picture Glen sent to Corina soon after she returned to Wisconsin. It says, in his handwriting, In memory of the first days you spent in Waterloo! Love, Glen W. Corina returned to visit Aunt Pauline and Uncle Tony whenever she could! 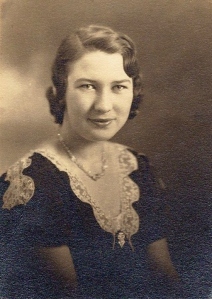 After graduation Corina worked for a wealthy, influential family. She learned many of the finer ways of keeping house, setting a beautiful table for entertaining, being a gracious hostess and much more. She didn’t realize it at the time but this early training would become very helpful later on in her married life.

When Thanksgiving time came Corina went to Iowa to visit Aunt Pauline, Uncle Tony, Uncle Larry and Glen again. Corina and Glen were so in love! Would they have to part again? No…they decided to get married!

Thanksgiving Day, November 30, 1933, Glen tried calling several pastors to ask if they could get married. It seemed they were all gone away except one! Mark Shockey, pastor of the Free Methodist Church was at home. They’d never heard of the Free Methodist Church before but… Yes, he’d marry them, although they’d better hurry because he was going hunting! Uncle Larry Reinertson and a friend, Marjorie Whipple, stood up with them. 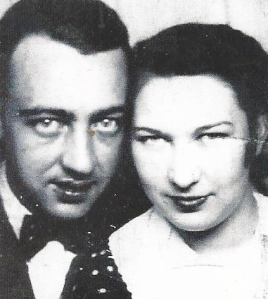 They had very little money so no wedding pictures were taken. Shortly after their wedding day they were in a corner drug store where there was a photo machine. They sat down together, put a coin in the slot, smiled shyly together as the camera flashed and waited a few minutes for the picture to come out! They were so in love!

Jobs were scarce and changed often. Glen and Corina moved to wherever Glen could land a job. So they moved to Cedar Rapids…Richard Glen was born September 7, 1934. They moved to Clinton…Lorraine Roseann was born February 15, 1936. 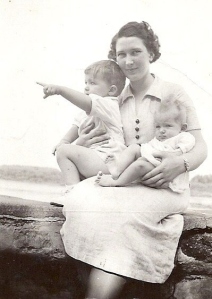 Corina with Richard and Lorraine. 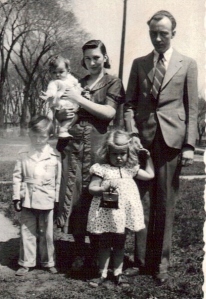 Pressure was building. Glen was smoking and drinking more all the time. Corina was busy with the children, keeping the house clean and trying to be a good wife and mother. Where was the romance?

One day as Glen sat reading the newspaper he began laughing! “Listen to this,” he exclaimed! Then he explained that his old friends were singing at a church! They were the friends he used to hang with in bars. The three of them would go bar hopping! They’d sing and he’d throw a fifty cent piece into a hat on the floor. Other folks would take his lead and throw in a few coins. Then they’d go to another bar, hand him his fifty cent piece and repeat the process! What were they doing singing in a church?

As he read on he told Corina they were singing at the Free Methodist Church! Wasn’t the pastor who married them Free Methodist? Well, there was a different pastor there now.

They decided to go that evening to find out what was going on! They slipped into the back pew as the first hymn was being sung.  J.K. French and Oscar Leeper, Glen’s old friends were there alright, with their wives. They hadn’t seen each other in years! The two got up to sing and harmonized so beautifully. It wasn’t at all the way they used to sing in the bars! Then a sermon was preached like Glen and Corina had never heard before. They felt like it was meant just for them! How could that be? They’d never been here before!

J.K. and Florence French joined Glen and Corina for coffee afterwards and told them of the change that had come over their lives. They had repented of their sinful ways and asked Christ into their lives. What a difference it made.

Glen still had the problem of drinking and smoking. He prayed about it, begging God for help and God delivered him from his drinking habit! To quit smoking was a bigger challenge but with the Lord’s help he conquered this too.

There were other changes in their life style as well but the peace they felt in their hearts and minds made it worth any sacrifices they were making in this new life with Christ.

2 Responses to Ninety-nine and… Part II