All In The Day Of Me At Camp

Here we are at our family camp. I just thought you might like to know what goes on here that brings us back year after year after year… In fact, I’ve been attending family camp  or camp meeting, as it used to be called, my entire life!!!

But family camp has changed immensely since I was a girl. It used to be mainly tents, now it’s mainly RV’s…big RV’s! We have a small 5th wheel, called a Shadow Cruiser!

Mornings are scheduled up. We have field workers telling us about their work every morning for an hour. It’s sooooo interesting. I attend every morning. Then after a break we have a Bible study for another hour. Coffee and snacks are offered between them. This morning there were pecan sticky buns!!! Now…pat me on the shoulder!!! I did not yield to temptation…I did not take one to eat…but I almost did!!!

Afternoons are free for whatever…that’s when I try to get on-line. Our camp now has     Wi-Fi! Yeah for technology!

Many, many go swimming in the lake. 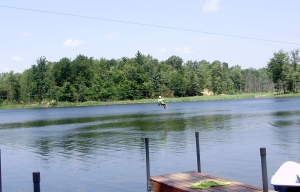 We have a zip-line that goes across the lake. If you look closely you can see someone on it. Click on the picture to see it larger.

The temperature this week is in the 90’s. For the second day in a row the power has been OFF! It’s not the camps fault…it’s Consumer Power that is to blame! But the office has power so I’m sitting here in air conditioning working on-line! Jerry is in the next room, working on Sudoku! We’re both drinking cold water.  Oh…Jerry just came in here to tell me the power is back on so he’s going back to our camper and he’ll be back to pick me up at 3:30. So type, type, type for me til he comes back.

Our grandchildren love to come to family camp. We have one granddaughter staying with us this year. Bella is here and loves it.

Bella is in the middle. Sydney, on the left, came along to bring Bella. Elmise, on the right, is camping here with her family! So we have a good family time while we’re here too.

I mentioned before that I have a bad cough. It’s not a cough anyone can pick up but it’s a bad enough cough that I’ve given several people a real scare when they’ve witnessed me in a coughing spasm. It’s also very embarrassing for me. BUT…a thought occurred to me when I was in the shower Monday morning. Isn’t that where most inspirational thoughts come through? In the shower!

Here it is: My doctor put me on a new medicine at my last visit with him…that’s about when these horrible coughing spells began…! Could these be a reaction to the new medicine? I had a slight cough when I went in to see him.

I mentioned this to my daughter-in-law nurse, Jessica. She looked it up on line and read off the side effects to me. Oh my goodness, it described me almost to a tee!

So, I’ve stopped with the pills. I’m still having some coughing spells but not as horrible and not as often. It may take several days for this stuff to work it’s way out of my system.

This such a great camp. I’ll put a few pictures on so you can see a little of what I’m talking about. There are three teams of horses pulling wagons to transport folks here and there. It’s a very popular activity. All ages ride.

I can't believe I'm in old age! I'm now in my eighties! I'm a child of God, wife to one, mother to five, grandmother to 15 plus two granddaughters-in-law! I'm a great-grandma now! I'm a sister, aunt, cousin, friend and neighbor. I'm a housewife and former ESL tutor. I love reading and writing. I've just retired from writing and editing a newsletter, Prime Time News, for seniors. I love genealogy, traveling, birds and animals, blogging and taking pictures.
View all posts by allinadayofme →
This entry was posted in All in the day of me..., Bella, Camping, Elmise, Family, Family Camp, Jerry, Memories, Michigan and tagged Camping, Covenant Hills Camp, Family, Grandchildren, Me, Michigan, Sydney. Bookmark the permalink.

4 Responses to All In The Day Of Me At Camp