I was minding my own business, washing windows, outside, on the front porch. I’m getting ready for company!!! Our kids are all coming home!!! 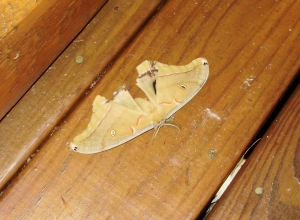 Well, just in time, before I stepped on it, I saw something on the floor! What is it? I called Jerry to come out and look at it. He said, “Be careful, it could be a bat!” Of course, I took pictures of it. I called our grandkids so they could come over to see it. Then I looked it up on line. It’s an Empire Gum Moth. 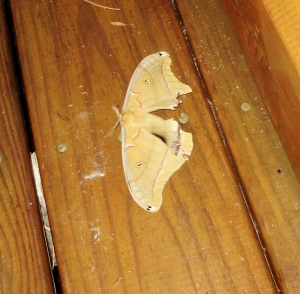 I took two angles of it. The poor thing…it looks like it’s been in several battles! If you click on the pictures you’ll be able to see details and a closer up picture.

This is so interesting to me. Even these moths were created by God. 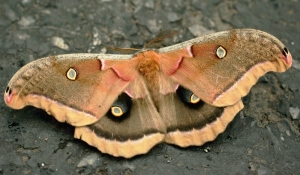 Then I downloaded a picture of one on-line. Empire Gum Moth.

I can't believe I'm in old age! I'm now in my eighties! I'm a child of God, wife to one, mother to five, grandmother to 15 plus two granddaughters-in-law! I'm a great-grandma now! I'm a sister, aunt, cousin, friend and neighbor. I'm a housewife and former ESL tutor. I love reading and writing. I've just retired from writing and editing a newsletter, Prime Time News, for seniors. I love genealogy, traveling, birds and animals, blogging and taking pictures.
View all posts by allinadayofme →
This entry was posted in Created by God, Encounter, Me, Michigan, Moth and tagged Created by God, Me, Michigan, Moth. Bookmark the permalink.