Posted on March 6, 2013 by allinadayofme

Our family was growing and we needed more room! We finally put our beginner home on the market and began looking for a bigger house or land to build another house. We found two acres of land, lots of trees and a hill! Perfect! Our little house sold, so we bought the two acres, moved our camping trailer to the foot of the hill, and began building our bigger house. 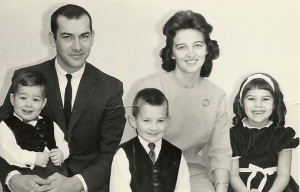 We moved in May, Timmy was one year old! Teddy was three and a half, Pammy was five and started kindergarten that fall! I wish this picture was in color! I made Pammy’s dress and the boy’s vests out of red velvet material so they matched! We camped all summer in our trailer!

I took this picture of Pammy and Teddy standing where our garage would be!. Oh, we had so much work ahead of us!

Jerry was the builder with brothers, Jim and Bob and brother-in-law, Roger, helping along with some friends, and me! Sometimes it seemed overwhelming! We moved in in October, even though we weren’t finished. We were far from finished! This house had a living room, dining room, kitchen, four bedrooms, a recreation room and a double garage. I’m having trouble finding snapshots of building. When I find some I’ll go ahead and post them. 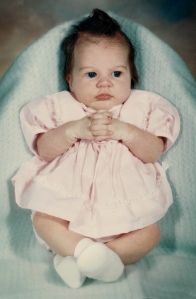 Two more babies were added to our family! Crystalene Beth (Christy) and two days before she turned five years old Robert Glen joined the family. I know it looks like I folded Christy’s hands together but I didn’t…she did!

Robert Glen (R0bby). He hates the curl I made on top of his head, but I can’t take it off.

After we’d lived here for several years we decided to do some remodeling. We added a screened porch going the length of the back of the house. We thoroughly enjoyed it! Jerry took out the kitchen windows and put in french doors! They opened to our breakfast eating area. I loved it!

Later, Jerry did the same thing in the rec room and we then made it a family room. He took out the original back door. The outside area of the doors going into the family room made a

back entry way into the house.

This was our complete family: Pam, Ted, Jerry, Tim, Robby, Anita, Christy. We lived in this house for 30 years! After Rob married Jessica we decided we really didn’t need this big house any more. We’d been dreaming of a log home for a while and decided to get serious about it…