Adapting to Change: The Age of Technology

Oh boy…this age of technology is way beyond me! Yes, I have a cell phone and a Kindle. Our televisions are flat screens…well, one is still the old style. We’ll be replacing it soon.

We have three television sets as compared to my youth. I was a teenager when my family bought our first television set. We lived in Des Moines, Iowa where my dad was pastor of a conservative, evangelical church. A few families in the church had TV sets but most folks thought they were evil. My parents had seen a few sets and a few shows when they were calling on the church members. (Yes, pastors used to call on their church family’s regularly!) What they saw was very interesting and was the latest thing. My dad wanted a television set! Oh, what to do… Most of the church members would frown at the idea of their pastor’s family having a television set in their living room! Finally he came up with a solution! He found a used nine inch television set and bought it. But we still had the problem of folks coming into our house and seeing a TV set! So it was taken upstairs to a bedroom. Every evening our family was huddled together in the largest bedroom watching I Love Lucy and The Andy Griffith Show and other great sitcoms on this tiny black and white nine inch TV! But we loved it! It wasn’t too long before it was replaced with a larger 13 inch set! Then finally enough of the church families had TV’s that we were able to take our set downstairs to the living room! There was nothing evil about television back then, that I know of. There were no swearing or obscene words. Sexual scenes were unheard of. Violence wasn’t shown. Game shows were fun. Music shows like Your Hit Parade, Lawrence Welk Show, Eddie Fisher, Perry Como and others were among my favorite shows. Happy Days, Jackie Gleason, Your Show of Shows. Finally a 17 inch set was purchased! Oh boy, I’m getting nostalgic! Those were the days! We watched the Today Show right from the very start of it in the early 50’s. 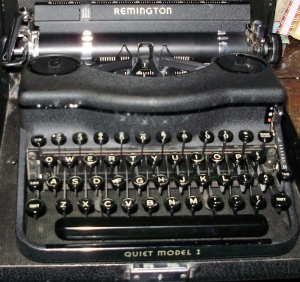 My typing ability goes all the way back to my 10th grade class and I’m so grateful for that. In fact, I’m concerned about the children who are using 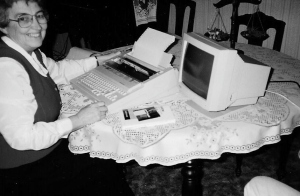 computers today before they have a chance to learn proper typing. Or isn’t it important?

Here I am on my new Word Processor.

My dad didn’t take typing, he typed with his middle fingers on both hands and was quite a fast typist with few mistakes! He knew I was taking his picture here so he was posing. He did well, at his age, to adapt to a computer. He was a writer, among other things, and had thirteen books published over the years. I’m proud of him.

My first computers were nothing like my  lap top computer today! My screen saver is a picture of my sister, Lorraine and me.

Here is where the new technology takes over. I feel left behind. Oh yes, I have my cell phone, flat television, lap top computer, even a kindle, my daughter gave to me, period. I don’t know if I’ll ever advance further. I can see technology advancing faster and faster. It’s hard to even keep up. I heard the other evening that television will soon be advancing to new levels! Oh, I can’t even imagine what they were talking about!

On and on and on. What will be next? I haven’t any idea…

I can't believe I'm in old age! I'm now in my eighties! I'm a child of God, wife to one, mother to five, grandmother to 15 plus two granddaughters-in-law! I'm a great-grandma now! I'm a sister, aunt, cousin, friend and neighbor. I'm a housewife and former ESL tutor. I love reading and writing. I've just retired from writing and editing a newsletter, Prime Time News, for seniors. I love genealogy, traveling, birds and animals, blogging and taking pictures.
View all posts by allinadayofme →
This entry was posted in Adapting, Cell Phone, Dad, Family, Home, Me, Memories, Technology, Telephone, Television, Uncategorized and tagged Adapting, Family, Home, Me, Memories, Technology, Television. Bookmark the permalink.

4 Responses to Adapting to Change: The Age of Technology