It Lived and is Doing Well 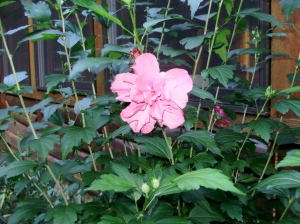 Last summer right about now we were offered a flowering bush but we had to move it right away. It was loaded with buds just about to open! Rob, son, and Jerry went to get it. It was a job digging deep enough to get all the roots. We planted it outside our sun room so we could enjoy it…if it lived through the winter. All the buds which would have been such beautiful flowers died! I expected them too, if only the bush would live through the winter. We faithfully watered it two or three times a day through the rest of the summer and fall.

It lived!!! I have watched it since spring. First the leaves came out! I was so excited! Then I began to see buds that surely would bloom into beautiful red flowers! The buds have gotten bigger and finally today two have opened! They are more pink than red but I’m very happy. I’ll take another picture when more flowers have opened. It’s covered with buds! The first picture shows some of the buds still to bloom. The the next two are the two flowers that opened up today. I love them.

They were created by God!

I can't believe I'm in old age! I'm now in my eighties! I'm a child of God, wife to one, mother to five, grandmother to 15 plus two granddaughters-in-law! I'm a great-grandma now! I'm a sister, aunt, cousin, friend and neighbor. I'm a housewife and former ESL tutor. I love reading and writing. I've just retired from writing and editing a newsletter, Prime Time News, for seniors. I love genealogy, traveling, birds and animals, blogging and taking pictures.
View all posts by allinadayofme →
This entry was posted in Created by God, Flowers, Michigan and tagged Created by God, Flowers, Home, Michigan, USA. Bookmark the permalink.

1 Response to It Lived and is Doing Well