Posted on February 8, 2012 by allinadayofme

To make our trip to Egypt complete we ended it with a sand storm! Picture 1 is the Nile River from our hotel window. Picture 2 is the same scene several hours into the storm.

This was our departure day! We did go to the airport but all planes were grounded. Picture 6 shows how we had to keep our noses and mouths covered. Needless to say we didn’t leave that day. We were taken to a hotel, not the beautiful Marriott Hotel where we’d been staying. They had already booked our rooms to new folks. We were taken to a less than satisfactory hotel. Bad. But we survived and later the next day made our way home to the USA.

A newspaper report by the Associated Press said this sandstorm grounded planes, forced the Suez Canal to close and caused four deaths in the Middle East. Yes, it was a bad one but it gave us one more memory in our bank of memories of the Middle East. 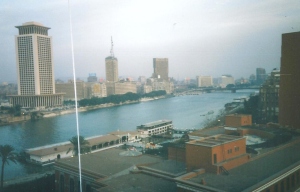 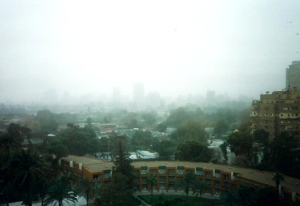 I can't believe I'm in old age! I'm now in my eighties! I'm a child of God, wife to one, mother to five, grandmother to 15 plus two granddaughters-in-law! I'm a great-grandma now! I'm a sister, aunt, cousin, friend and neighbor. I'm a housewife and former ESL tutor. I love reading and writing. I've just retired from writing and editing a newsletter, Prime Time News, for seniors. I love genealogy, traveling, birds and animals, blogging and taking pictures.
View all posts by allinadayofme →
This entry was posted in Africa, Egypt, Traveling and tagged Africa, Cairo, Egypt, Sand storm, The Nile River, Travel, World. Bookmark the permalink.