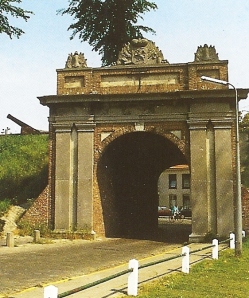 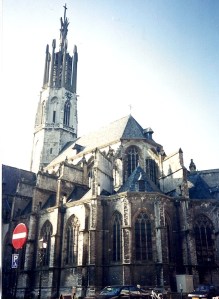 Jerry and I went to The Netherlands in 1994! Was it really that long ago?! We flew into Schiphol Airport between Amsterdam and Haarlem. Our hostess, Vivian, was there to meet us with her mother, Annie. We drove to St Jansteen, a suburb of Hulst, near the Belgium border. We actually drove through a portion of Belgium to get to Hulst and St Jansteen!

There were bikes everywhere!

The picture of the mother with her two children was quite typical. She put one child in front and one behind. This bike has a wind break with a visor!

Okay, the bride on a bike was a post card I found!

St Willibrord’s Catholic Church. Construction on this church began about 1200! It was completed 250 years later!

This picture of the airport was supposed to be first but it refuses to be first. So here it is.

On the way from the airport to St Jansteen we got caught in a huge traffic tie-up. There was an accident way up the line that was the cause. We sat for over an hour. Here Jerry got out to stretch his legs. A man come over and started a conversation with him but he didn’t give Jerry a chance to say he didn’t speak Dutch! He finally stopped…maybe he had asked a question! Anyway, Jerry let him know he only speaks English. The man walked away in disgust!

The picture below Jerry is of Vivian. You can see what a traffic tie up it was! 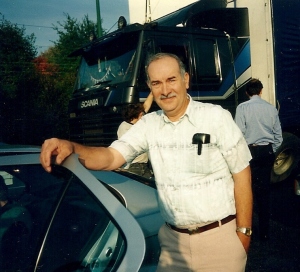 I can't believe I'm in old age! I'm now in my eighties! I'm a child of God, wife to one, mother to five, grandmother to 15 plus two granddaughters-in-law! I'm a great-grandma now! I'm a sister, aunt, cousin, friend and neighbor. I'm a housewife and former ESL tutor. I love reading and writing. I've just retired from writing and editing a newsletter, Prime Time News, for seniors. I love genealogy, traveling, birds and animals, blogging and taking pictures.
View all posts by allinadayofme →
This entry was posted in Church, Europe, Friends, The Netherlands, Traveling and tagged Europe, Friends, The Netherlands, Travel, World. Bookmark the permalink.