Today is the day for remembering our wonderful service men/women. As far as I know I only have men in my family who served but I admire all women who feel the duty to do their part. I have several members of my family and my husbands family who served in the armed forces.

The first picture here is my second cousin, Lewis Hood. He served during WWI and was killed in action the day the war ended. Thank you, Lewis.

The second picture is of my Uncle Richard Aanas. He was in the army during WWII and lost both of his legs while fighting in France. The new cars given to him by the US government were a far cry from what he deserved. Life goes on, he became an accountant, married, raised four children, became mayor of his town. Thank you, Uncle Richard.

I salute each of these relatives of mine. If I’ve left any out, it was done unintentionally.

I also salute all who are off fighting somewhere in the world today. May God bless you and keep you. 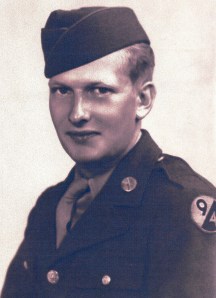 I can't believe I'm in old age! I'm now in my eighties! I'm a child of God, wife to one, mother to five, grandmother to 15 plus two granddaughters-in-law! I'm a great-grandma now! I'm a sister, aunt, cousin, friend and neighbor. I'm a housewife and former ESL tutor. I love reading and writing. I've just retired from writing and editing a newsletter, Prime Time News, for seniors. I love genealogy, traveling, birds and animals, blogging and taking pictures.
View all posts by allinadayofme →
This entry was posted in Family, Heros, Military and tagged Family, Veterans. Bookmark the permalink.